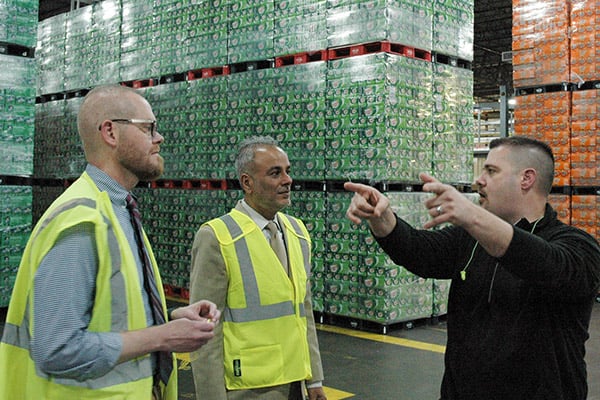 Monday’s visit at the Coca-Cola Bottling Company of Northern New England centered around the facility’s $65 million in investments in the 3rd District, including a $43 million sales and distribution center in South Windsor. That new center allows for the company to expand its East Hartford Production Center by investing in a $22 million can production line there. Not only will this generate more local tax revenue in South Windsor, increasing the town’s annual intake by more than $100,000, but it will lead to new jobs at the facilities. These investments come after Coca-Cola spent an additional $18 million on a new automation system in 2015 at the plant, designed to create new efficiencies in order collection and distribution.

Discussions during the tour covered several issues legislators are deliberating, including a proposed tax on sugary drinks and a proposed expansion of the state’s bottle bill. Sen. Anwar, a medical doctor, mentioned the tax on sugary drinks in response to health concerns, with the discussion turning toward Coca-Cola’s increased focus on low- and no-calorie beverages. These alternatives to sugary drinks are becoming increasingly popular among consumers and meet the company’s efforts to provide consumers with choices for their benefit, officials said.