Coca-Cola South Windsor and East Hartford Production are saying “New Year, new me,” this month. Over the last year, Coke Northeast has made significant investments in Connecticut by building an entirely new sales center and expanding East Hartford Production, both of which are key for the growth and longevity of our business and our people.

“Line four is going to increase efficiency and decrease the amount of time it takes to make cases. It will help us continue to make other people’s cases, other bottlers that can’t keep up with demand,” says Billy Mayfield, Maintenance Manager, who played a key role in the new line’s installation. “That’s one special thing about East Hartford, we don’t like to brag but we’re proud about being successful. We do feel like we’re better than the industry standard at manufacturing sparkling beverages. There will definitely be a learning curve, but that will lend itself to new goals.”

The new line will also help to reduce transportation costs, eliminating the necessity of having certain products shipped in from other bottlers. It will also reduce the risk of being out of stock with products outside of their previous manufacturing capabilities. Furthermore, it bolsters future opportunities for all associates as the facility becomes more self-sufficient.

“We need a place to put all of the product we’re producing. We’re expanding like crazy! We’ve gone from 19 to 36 million cases, then throw another line on top of that,” says Mayfield, “It’s been a tough year, but we’re embracing the changes here and see it as an investment in our future as a company and for workers.”

The new space design enables our “one team” culture with an open-concept office area on one floor (compared to the two floors in East Hartford) that includes sales, distribution, and drivers. The facility also boasts large conference rooms, more meeting spaces, and even a private mother’s room.

“We’re excited and grateful that the company decided to invest in Connecticut,” says General Manager Mike DeFeo, “There seems to already be a culture and mindset shift coming here. It’s a welcome change.”

Although the new space itself is a change, the biggest change is the new state-of-the-art warehouse automation system, Vertique. Vertique offers fully automated order picking that is able to customize loads for the customer. The system also improves operational efficiencies and overall customer satisfaction. The faster pace of the new automation system has been an adjustment for the warehouse, but so far associates are really enjoying it.” 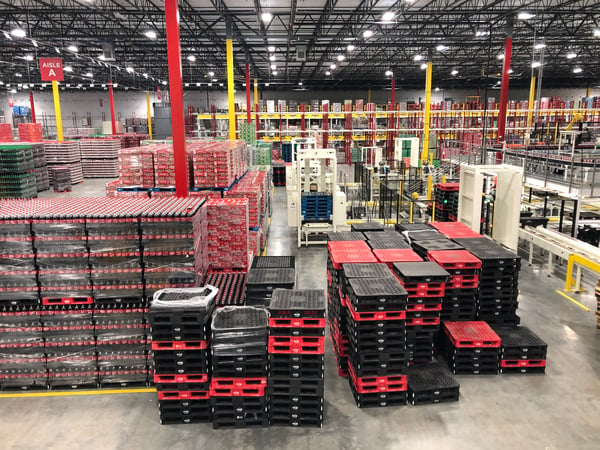 “They say it keeps them on their toes, makes the shift go by quicker, and builds teamwork,” DeFeo said.

On top of that, 31 docks were built in South Windsor to help improve truck-loading efficiency.

Details are still being worked out for a public open house for those that would like to see the new facility in person. Keep an eye out for event information later this month.