If there is one thing that 2019 has taught us all at Coke Northeast, it is that change is often hard and scary but we’ll always get through it together as one resourceful team. The evolution of Coca-Cola Boston is a testament to this idea.

Up until this time last year, Coca-Cola Boston was producing about 22 million cases of product annually. Last fall, the tough decision to end production at the facility was announced. While difficult, the closure of production allowed us to expand the warehouse and bring over Cooler Services, which was operating out of the Make Ready Center in Waltham, MA.

“Before, there were silos. You had sales, warehouse, cooler service, and distribution all operating independently,” said Dave Omobono, Senior General Manager. “Now, we have a typical sales center and all of the departments are integrated and working together towards one common goal. The communication and collaboration is so much greater than where it was.”

The new Coca-Cola Boston warehouse can be described in one word: efficient. It is well-lit with longer pick aisles that the team was able to sequence themselves.

“We sequenced our pick in the order of our Look of Success. We can go from warehouse to truck to shelf seamlessly,” said Dave. 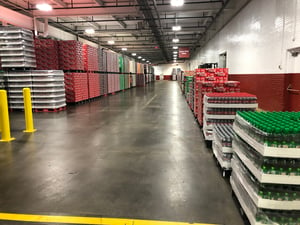 Previously, the space was congested, which made accidents more likely in the tighter warehouse. Now, the aisles are wider, the ceilings are higher and more product fits on the floor. This allows for less forklift moves and helps drivers save time with reloads.

New wrap machines and “pallet pals” (which allow warehouse associates to load and unload pallets at a comfortable height without the need to constantly bend over)have also eased the strain on the always-busy warehouse order builders, reducing the likelihood of injuries.

With the Boston warehouse moving into the space that formerly housed production, there was a huge opportunity to bring the Cooler Services team over from Waltham.

“We were up in Waltham and the sales folks would be here selling in equipment going back and forth wondering what we had, working around schedules and setting up phone calls. Now these folks all meet live every day. The sales people know the techs, they know what we have in stock, and they come down and see what they need,” said Ed O’Hear, Director of Equipment Services, “We were kind of on an island before, and now we’re integrated into the business. That’s a big win!”

The vacated warehouse space was like a blank canvas that allowed the team to set up Cooler Services in a way that made sense for them, with the right equipment in the right places. It’s brighter with all new lighting, and work stations are set up far better for associates ergonomically.

Boston Cooler Services also built brand new fountain work stations. Previously, they would ship fountain equipment to an outside company to be fixed or manufactured. This work now gets done in-house and although the team is still building its skillset, it’s a worthwhile investment for the future success of our business.

“There are still some growing pains but we’re a lot more efficient, productivity has increased, and at the end of the day we’re getting better at what we do, which is taking care of the customers,” said Dave.